I have been reading lots of articles on the topics of publishing games, testing them in the real world and making a bit of cash out of them via sponsorship or in-game advertisements.

It hits me that a lot of people get valuable feedback from testing their games in the harsh world of flash portals or FGL.

A common theme that I picked up on is that people are pushing games out without making them elaborate masterpieces and in the world of flash portals quick, funny and rewarding games can make more of a splash than long, perfectly coded and detail developed games.

Which brings me to the conclusion that I should get a game out there sooner rather than later to test the waters and get a feeling for these communities and see what valuable feedback comes back.

Have a long flight in front of me tonight and I am rather looking forward to getting flash open and working on Martin the Mouse: Cheese Wars!

I have been delving into the introductions of Flash game development and ActionScript.3 over the last few days via the wonderful source of online tutorials, blogs and sites. My conclusions are that there is a wealth of information out there but it is hard to quickly decipher between top quality content and a buggy and broken tutorial. This makes it all the sweeter when you find a tutorial that is simple to follow, informative, flexible to your needs and covers numerous topics with quality and without assuming prior knowledge.

I was stumbling around the internet looking for a Actionscript.3 game tutorial that would help me learn but first actually worked! After starting a few tutorials and not having much luck, I suddenly found Michael James Williams‘s amazing Avoider Tutorial and my prayers were answered! It’s a magical tutorial for the beginner like myself as it is very clear to follow, helpful comments from fellow learners and flexible (which Michael JW encouragingly … encourages).

As I was going through the tutorial I began to adjust the tutorial and make my own version of the Avoider game which was different in many ways, including key functionality. I really encourage other learners to do the same thing when completing the Avoider tutorial (and other tutorials) as it gives you a morale boost as you are making something from scratch and not copy-catting it out. Through this process I began to develop a game called ‘Martin the Mouse in Cheese in the Sky’ (due to be changed to Marty the Mouse : Cheese Wars or simply Cheese Wars).

The story goes… Martin the Mouse is chilling out one sunday afternoon and looking forward to eating the big block of Edam Cheese he just bought from MouseMart. All of a sudden a magpie or seagull swoops down and flies off with his cheese … “!@#*ing seagull!” – with Martin’s belly rumbling he decides to get in his hot-air ballon and attempt to steal his cheese back…. and rightly so Martin. 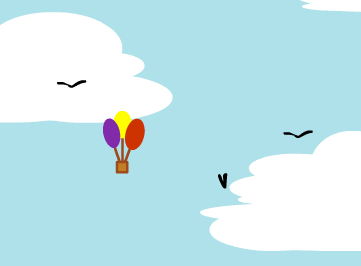 Martin must ‘avoid’ the seagulls…. else ( death )

My game follows the general flow of the Avoider Tutorial but just with a different GUI, adding a storyline and game rules. I assign a wind effect that pushes Martin and his ballon from left to right, whilst an flock of seagulls fly from right to left. Martin also slowly sinks downwards due to a hole in his ballon that he forgot to patch, but I helped him out by giving him the ability to hit the gas and slowly rise upwards with the ‘up’ key. I had never thought of this game idea before starting the tutorial but by letting my mind and imagination drift from the tutorial this all fell into place easily as a concept. Obviously the story wouldn’t be complete without Martin being able to steal back his cheese, I therefore added a ‘target’ of a hovering seagull with cheese attached.

In the coming weeks I will release a tutorial (a rather grandiose term for what will inevitably be collection of small tips of varying usefulness) based on what changes I made from the Avoider tutorial which I think are worth sharing to the Flash/AS3 learner like myself. Releasing said tutorial will thus observe ‘Rule 3’. I am still adding things to the game, coding little additions and revamping the graphics but once done I will post the full game for readers to offer their criticism – thus observing ‘Rule 5’.

I am a creative guy that works in a non-creative industry …. this sucks! I choose little projects from time to time to complete in my spare time to keep me on my creative toes.

I recently started looking into Actionscript.3 and Flash game design and it has tickled my creative fancy! I have therefore decided I am going to dedicate myself to learning Actionscript.3 and flash and develop some amazing stuff ( amazingStuff == randomNonsense ).

1. I use OOP as much as possible in its purest form

2. I document my process of learning in order to help myself reflect and learn more

3. I am planning on learning a lot from online sources and tutorials – therefore I will give back to this amazing online source by writing tutorials

5. I open myself, my creations, my code and my ideas to the scrutiny of the public masses – criticism is the source of progress

Thanks for joining me on this journey in whatever way you have.